Many people who install the Crown engine without the automatic transmission chose to wire the engine to the car themselves.

To make this a little more accessible for all I’ve taken my experience from wiring and then re-wiring my own car, combined it with “KDog’s” excellent wiring Diagrams and some great freehand drawing supplied by “thegianttomato” plus numerous threads and posts of this and other Sites and distilled it into what I hope is a simple and easily followed set of instructions that will give you the satisfaction of “doing it yourself”.  Lastly I need to thank 34FORD for the excellent Visio presentation schematic of what we are doing here.

To make the engine run requires the connection of around 12 wires.  It’s that simple.

If you haven’t done automotive wiring before have a surf of the Net and learn what you can.  You don’t need to be an electronics engineer but if you can solder and understand how the current flows plus the use of relays you are well on your way.

You need the following tools:

Parts you will need:

When extending wiring always try to use the same coloured wire.  If you can’t get a perfect colour match, try and get as close a match as possible.  Always be careful you don’t use a colour that is already in the loom you are working with.  There’s nothing worse than following a blue wire that turns into a red wire somewhere inside a loom or out of sight.  Make the effort when carrying out the wiring as it will save you an enormous amount of work later.

It’s worth having a look at the diagrams KDog produced and posted on the Lextreme forums. print off the appropriate pages.  If wiring with the ECT the pages there will make it easier.  Once you have the engine wired the transmission will be easier as you’ll have proven to yourself it’s easier than it looks.

Ensure the battery is disconnected before doing any work on the cars electrical system.

Number the plugs on the ECU (with your marker pan) as follows:

Once you’ve removed the loom and ECU and ECT from the car you need to separate the ECU from The ECT.  First step is to put one colour of electrical tape on the ECT plugs and another on the ECU plugs.  This will save getting confused when working with them. You could just write ECU and ECT on the plugs with a marker pen and not use any electrical tape at all.  This is a sign of quality work.  NOTE: If you’re keeping the Auto don’t cut any wires.

To separate the ECU/ECT cut all wires connecting the ECT to the ECU.  Perusal of KDog’s table tells us the wire colours are:

The best thing here is to look carefully before cutting as similar wire colours appear elsewhere on the ECU.  Check they join the ECU plugs to the ECT plugs. When cutting the wires try to get as close to the plug as possible and fold the wire back into the plug to stop it shorting with another cut wire.

With Plug number 4 an ooption is to open the ECU and cut the wires off the board and remove the wires and plug for convenience.  I retained the black rubber gasket and filled the holes in it with some black sealant to keep dirt etc out.

Next be brave and cut all wires leading into the fuse box.  The Toyota box won’t be used so cut the wires close to the plugs.

Once you’ve done this you can separate the transmissions wiring from the engine loom all the way back to the transmission.  You can discard them.  It’s a bit fiddly but worth doing as you will have fewer wires to fight with.

I wired my car with the twin speed fuel pump so follow these instructions if that is the way you want to go.  If you are happy with a single hi-speed fuel pump I will show the different steps at the end of this document plus some advantages/disadvantages of both options.

Position your 4 relays, fuse board and ECU on your alloy panel.  Make sure they’re far enough apart to access them easily and have plenty of room to work around them.  One thing to bear in mind is try to locate the ECU so the existing engine loom will reach it without having to unplug it every time you want to work around it.  I have to unplug the plugs 1 & 2 on mine and it’s a PITA!

Wiring the relays for power.

I started wiring with running permanent 12volts (connected directly to the battery through a fuse) to each relay. I did this by using short pieces of the same coloured wire and crimped two pieces of wire (after soldering them together) in each terminal.  If you don’t know the correct way to solder try this linkhttp://www.aaroncake.net/electronics/solder.htm  I ended up with a short “daisy chain” of terminals.  That’s your first (hopefully) successful soldering task.  When you do this try and keep the wiring neat.  I used wire ties to temporarily hold the wires neatly.  A short length of discard fuse wire is simple sand easy to twist and untwist.  I used cable ties after everything was finished for a permanent job. After this I ran an earth for each relay.  I did this the same way as the power cable and tied them to the power cable. I “earthed” the earths to the alloy panel using a loop terminal swagged to the end and bolted to the panel.

Wiring the ECU to the fuse board and relays.

This plug also has an earth that requires inclusion with the above earths.

That has the ECU wired to the relays and fuse panel.

Wiring the Relays to the car.

Run all the following wires through the 6 way connector for ease of removal.

The rest of the Loom

We now need to wire the rest of the engine loom to the car.  REMEMBER you need to run these wires through the 8 pin connector or your wiring loom will be permanently attached to your car.

All wires running from the ECU to the car (not the relays or fuse board) must go through the 8 connector plug otherwise you will have to disconnect/cut all the wiring to get the engine out.  No fun!

At this point you are ready to do a little checking and tidying up.

Once you are satisfied all is in order you can re-connect the battery and see what happens.

Don’t expect any smoke.  Not if you have it right.  The ECU is well protected against incorrect polarity so don’t be paranoid.

Using your multimeter do the following checks:

You can now tell all your mates “Yep I did the wiring myself”.  Best thing is we didn’t use electrical tape (except to identify the plugs) and all your joints should be sound and protected by heat shrink.

To wire the ECU with a single speed fuel pump make the following changes:

How Should it all Look?

The photograph below shows an installation that is easy to follow and took around 3 hours to assemble on the kitchen table. 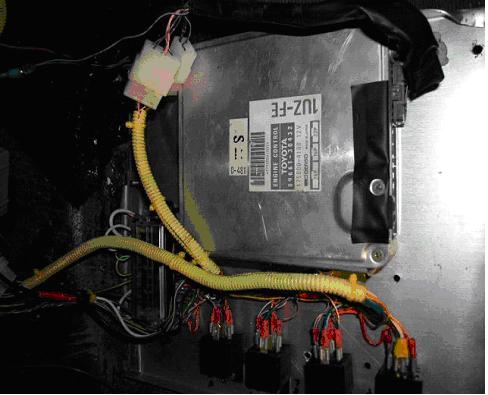 The in-car wiring took another couple of hours.

The neater it is the better chance you have of it being done correctly and it will be much easier to trouble shoot.

In the photo you will notice the two plugs to the engine loom are out as I have the ECU folded down for access.  I could mount it upside down and the plugs would reach.

Notice the Relays lined up neatly on the alloy plate beside them.   Plus the looms are neat and run in a logical order.

One improvement that could be made is to put some insulation along the panel below the relay terminals. To ensure no short circuits occur.

Below is a schematic of what we have described above.  The schematic was drawn by 34Ford in Visio.