Ive played with trying to get those rear bearings before. I've had to replace a lot as guys seem to miss that the oil feed for the rear bearing from a 4 runner / surf trans is through the centre of the shaft and the lexus auto it's along the splines so the rear bearing doesn't get a clean supply of oil. Some guys are but lucky seeing that I do lots of 1uz stuff I get to see all the failures. Toyota did some funny sizes on the bearings so I always use genuine these days and we pay far more than 45usd for the same bearing over here.

Good to know, might just go that route, then.

I was noticing that it looks like that bearing gets oiled from the shaft (I bought this transfer case loose, never had an A340F to compare). There's a little hole in the output shaft from the lexus, but I think it got covered up by the speed sensor tone wheel. I need to run the engine on the stand again, so I've been tempted to try it with the adapter off, and see if I get fluid out there, and take some measurements to see if it meets the "receiver" in the adapter. Although it sounds like you maybe already have done that.

Or is there another fix? Seal it in and pack it like a wheel bearing?
G

I started getting these setups in that had failed rear bearings or lots with split sleeves. Taking that most stock Toyota engines had around 105kw and the uz is double that its not surprising that some sleeves split. Then I looked into oil flow too. Ive had a trans on my bench atm to doma few videos on but have more pressing work just at the moment
N

I started taking pictures to try to describe what I was discovering (I'm sure not news to you, Kelvin, but anyone else that may be considering this swap), and decided to just take a video. I'll edit that a bit this week and posted.

But I did decide to drill a 1/8" hole in the end of the output shaft. I used the Jeep Slip-Yoke-Eliminator trick, of running the engine in gear to spin the output shaft to drill a straight hole in it. Sure enough, only needed to drill 1/2" deep or so, and I broke through into a fluid passage. 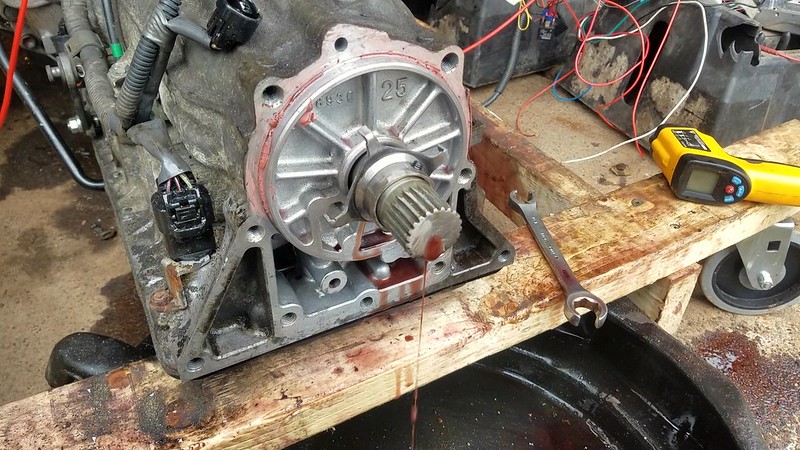 Did some testing on a thermal exhaust coating to try on this setup.


Next is to edit some video I took about lubricating that case adapter bearing.
N

And a video about the modifications I did to bolt on a transfer case.

I've started work on my 85 pickup 1uz project. You are a few weeks ahead of me. I look forward to seeing your progress and steeling your best ideas!

My wife is pregnant, and due to complications hasn't been able to work since shortly after my last update. So my 4Runner has fallen off the priority list. It's been a real strain on our family, but she'll be better in March....so I'll get back to it.

wow. I can completely relate. Son was born with complications and my own project sat for a long time.

Hope all works out for you and your wife.
L

Numbchux , I learned so much from your videos on IUZ conversion especially the transfer case and oil for bearing. Wish you best to you and your family. May be God be with you.
N

Life pushed this project off the front burner for nearly a year. But it's back. 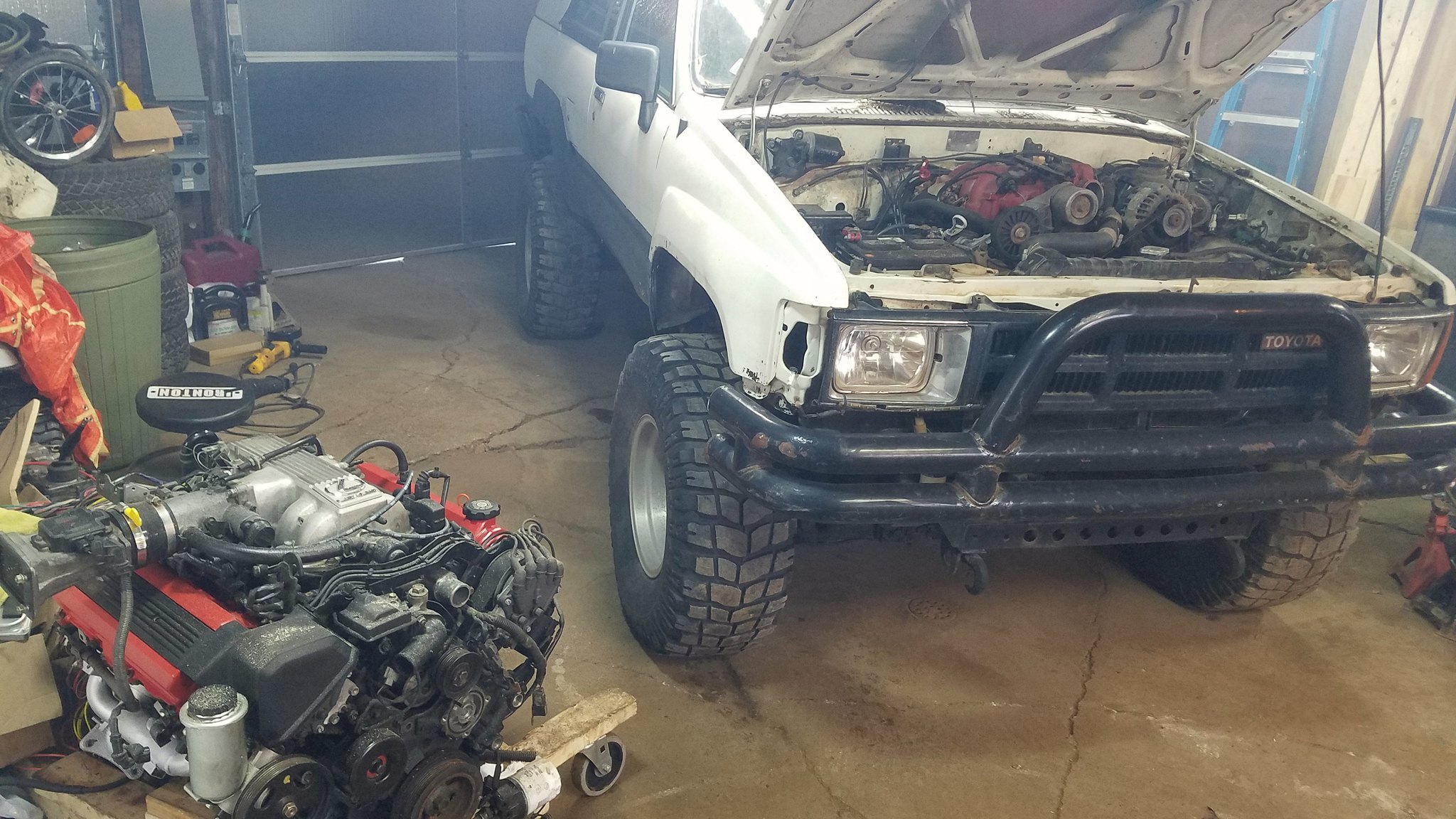 I'm unemployed for another week. I'm hoping to get this to the point where it can move around the yard under it's own power in that time without completely neglecting the children.
N

numbchux said:
I'm unemployed for another week. I'm hoping to get this to the point where it can move around the yard under it's own power in that time without completely neglecting the children.
Click to expand...

This was a really funny thought, right? Well, I'm back at work, and the 1UZ is more apart then ever. Oh well, I knew this was a chance.

I saw conflicting information about the sump. Generally speaking, yes, the front sump is preferred for the IFS. But my truck has a 2" body/drivetrain lift, and I saw a couple people say that in that case, they were able to use the rear sump. I had picked up a front sump setup, but wanted to test fit before making the decision. Well, the decision has been made and now the engine is upside-down on the stand awaiting Lexus parts (pickup gasket is not a Toyota part number, no Lexus dealer locally, so it has to be ordered in there and then shipped back out to me).

Going to reseal the oil pump while I've got it apart this far.

Once I actually took apart my truck, I decided to move the battery. I ordered a used SC400 airbox on ebay and will be using that.

Changed my plan for motor mounts, so I ordered some cheap premade universal LS motor mounts that use leaf spring bushings. Needs to be modified, of course, but should work well.

Cleaned, etched, and POR15ed the frame in the engine bay while the 4.3 is out.

Right after pulling the 4.3: 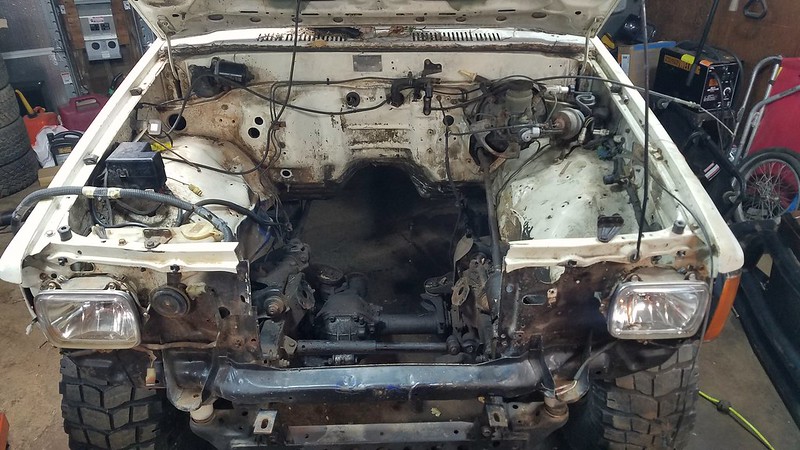 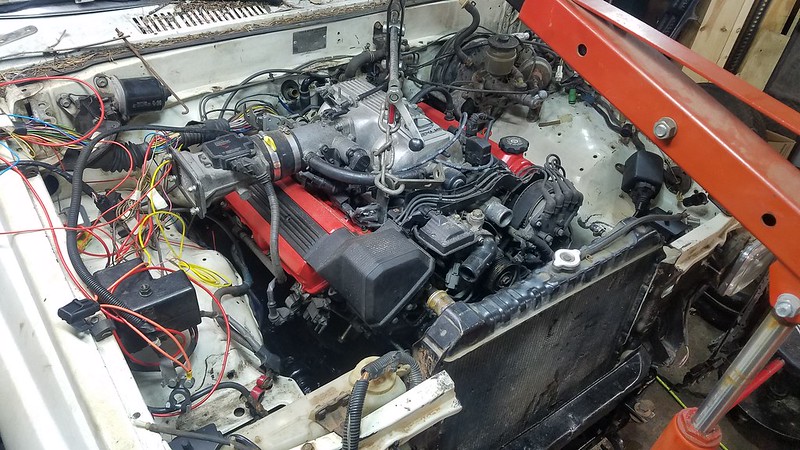 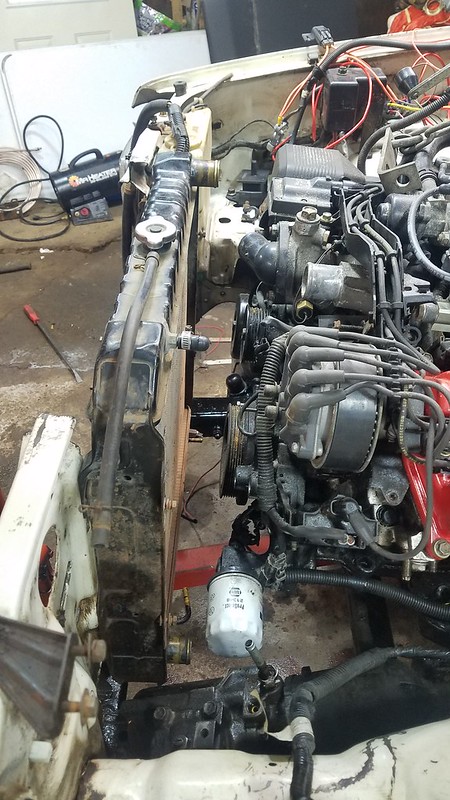 This engine has clearly had a water pump and timing belt put on it, so I wasn't going to touch that stuff. But, after a test fit, I decided to swap the SC400 oil pan for the LS400 one. So I decided to reseal the oil pump while I was in it that far, which of course required removing the timing belt. I pulled the actuator, and the tension remained. Looked through the hole where the actuator was, and the tensioner was not centered in the opening. Normally, I probably would have panicked, but thanks to @gloverman's videos, I immediately knew that the washer was probably missing. Belt was tight, so they must have installed that actuator before tightening the tensioner, but still....

Hopefully I can put the oil pump/pan on this weekend.

I didn't like how I pictured the motor mounts to work once I did the test fit last weekend. So I ordered a set of cheap ebay Universal LS swap motor mounts, and modified the bolt pattern to the 1UZ: 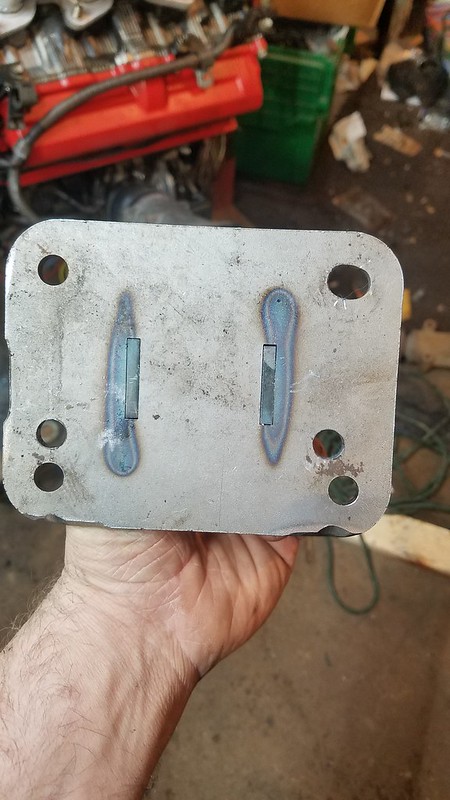 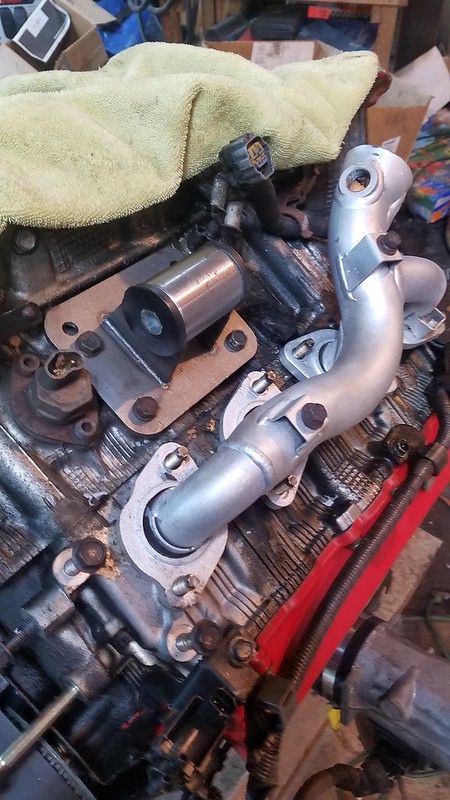 Got the oil pump on, went to swap the rear main, and opened up my box of Lexus parts, to realize I don't have the correct rear main seal. It appears that Toyota (at least on Toyotapartsdeal.com, my go-to site to double check this stuff) supercedes the number to a Paseo cam seal (9031135040). So, currently have a call in to the Toyota dealer to get the right thing.
N

Finally took a picture of the clean engine bay with the painted frame. Looks soooo much better. 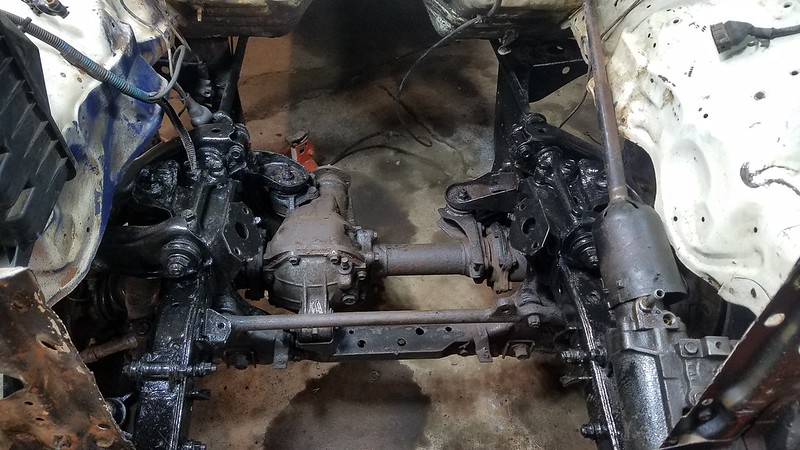 Finished swapping oil pans, resealed the oil pump, fixed the timing belt tensioner, resealed the rear cover, cleaned up the wiring, cut the flanges off the manifolds, and stuffed it back in the truck.

Still a lot to do, it wasn't supported by the truck yet, I did put the tcase crossmember in and propped things up on some wood blocks (have to build the motor mounts yet, and got the wrong tcase mount. 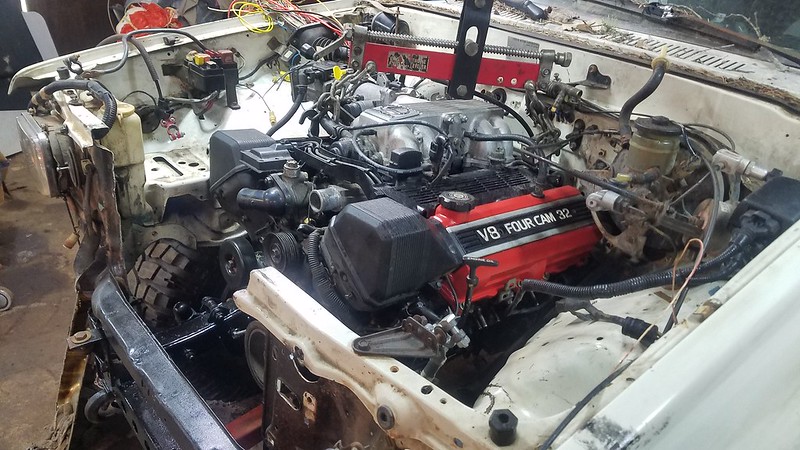 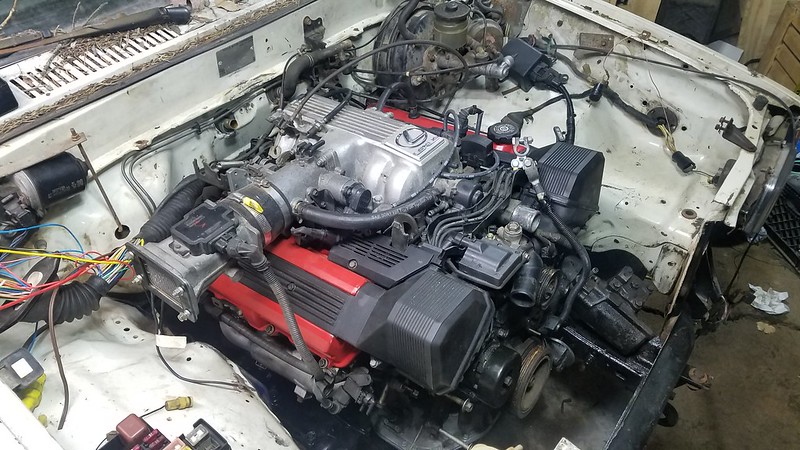 These motor mounts are going to work out nicely 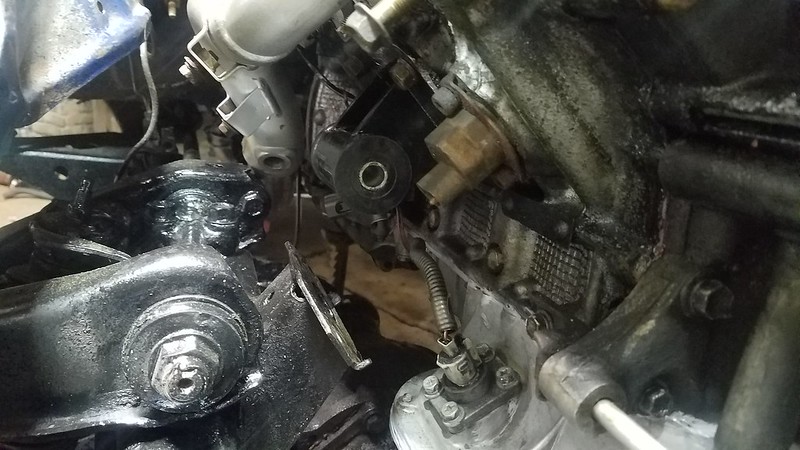 Looks like we are at about the same place in our two builds. Feel free to reach out if you just need a second opinion.

My motor mounts are very very simular to yours. I gave up on the stock exhaust in favour of 4.7 Tundra headers. They were less work to make fit for me in my straight axle truck.

WIll start to build my oil pan shortly (Custom) .

I've been sneaking off to the garage for an hour or 2 every night once everyone else is asleep. I'm a zombie at work, but I'm making progress.

I ordered a few parts earlier this week, and last night was just some test fitting.

First, a couple weeks ago, I ordered a big batch of parts from Rockauto for all my cars, in that, I ordered a new tcase/transmission mount for the T100, as my case didn't come with one. RockAuto had one listed for 4WD (#EM2410), but when it got here, it was clearly NOT for 4WD. They were quick to give a refund (sounds like I don't even have to send it back), but the correct one is more expensive.

Got the correct mount and was able to check a couple things. First, the T100 4WD mount has the same bolt pattern at the crossmember as the older stuff (my crossmember is for a 22RE/W56/RF1A). Looks like I'll probably have to move it back about 3". 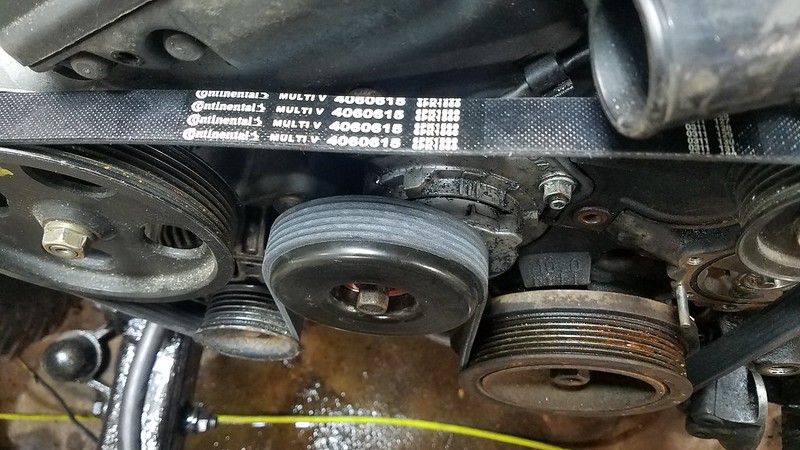 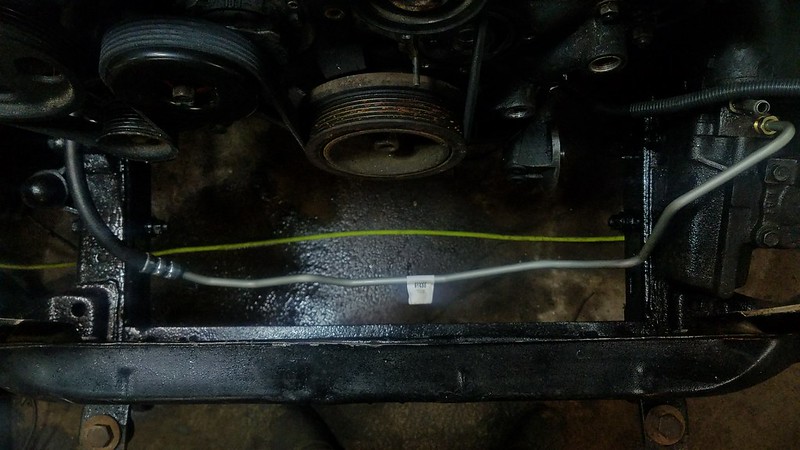 There's a tab on the banjo end to keep it from rotating on the pump when you tighten the bolt, I had to bend this out a bit to fit well on my LS400 pump, but that's it. 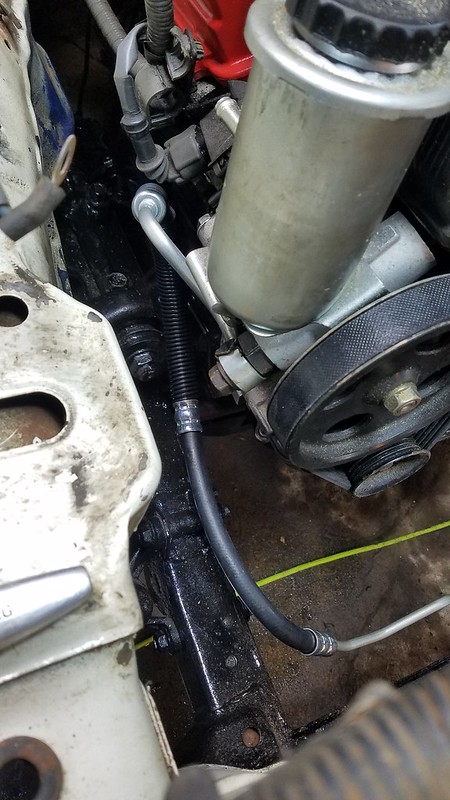 I will make a mount of some sort to support the hardline on the RH side of the truck. It runs right along the back side of my radiator.

I didn't take a picture, but I bought a cheap single-pass cooler that I will mount behind the bumper, and have the PS return line go through it.

hose fits good! I had the same idea but it was cheaper to have n custom hose made using the stock ends from the lexus and 22r. . Mine runs the same route and I plan to install the cooler in the bumper. Sent pics when you get it installed.

will be working my remote oil cooler tomorrow.
N